here we are. HEHEHE LOOK 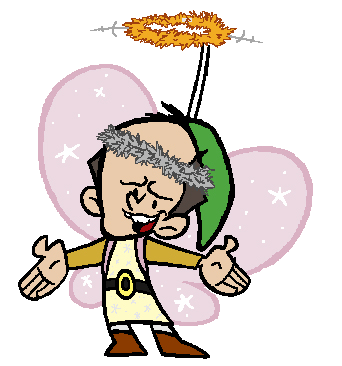 Beazie is auditioning to be an angel in the Snatavity! There isn’t actually an angel in the story, but he’s just doing it to win that argument with Snatter, when Snatter said he’s no angel and he went “I am!” Maybe he can make up something to do with angels and then we can say that’s part of the christmas story from then on.

But guess what? Even though he dress up, they say he FAIL TO GET THE PART!! 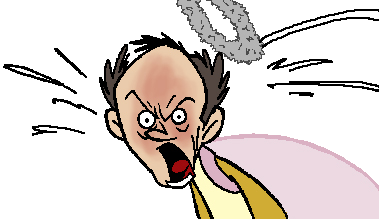 Defeat!! Hehehe. The reason is that Rose is going to be the angel instead, because she’s the only girl and all angels are girls. HA HA HA BEAZIE.

(i mean snatter’s mum was a girl as well, so maybe the teachers are just being inconsistent.)

BEAZIE FAILED AGAIN. BEAZIE FAILS AT EVERYTHING, HE HA HE. Pete is particularly laughing at him with Snatter. He say “Look at that old rotter Toiz! His family can’t even afford proper school clothes, I don’t know who he’s trying to impress with his silly angel costume! Har har har!”

“I haven’t got a uniform either, Pete,” saye Snater.

“Oh, but the basic clothes suit you, Chris,” Pete say. “You look quite striking in them, your beard really sets off the green. Look at him though, he hasn’t even got any hair!”

Beazie’s on the warpath tho. “One day,” Beazie shouts with a big red face, “I’ll be rich, and then I’ll GET ALL OF YOU!!” and he stamp’s away.

haha Rose is trieing not to laugh, because she knows she’s going to be a much more good angel in the play instead of a stupid baldy one, but she tries to look sympathetic and Beazie just pushes past her and stamps off!

OE NO I FORGOT WE WERE RUNNING AWAY FROM SOMEONE AND HERE HE COMES, HE’S FOUND US!! 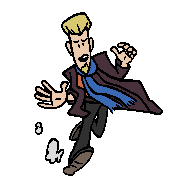 Oe noooeee!! Who is he and what’s he going to doo!