Oe, we go down some steps

Oe, we go through some roomes,

Oe, we go round a corner,

Oh! And Look what’s here! It’s a newspaper on the floore and there’s a door on the front of it. And inside… A chocolate! Yay! nom nom nom. It’s a chocolate in the shape of a present. But the ribbon around it is sort of thin, like an unusually thin ribbon.

Or a normal ribbon on an unusually big present.

Oh wait is… OE! Look!! The article on the front page of this paper is cut out!

Remember?? The cut out bit of newspaper! This must be the VERY NEWSPAPER we were looking for, to find out what happened to Dooper and why different bits of paper think he’s dead even thoe he isn’t! Quick, let’s turn to page 2 and read the rest of the article! 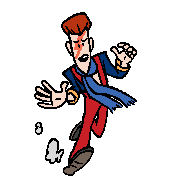 I think it’s a clowne of some sort.