This is Agent M8s, reporting (this time almost certainly) for the last time. I believe I can say without contradiction that our job here is now concluded. When the Accounts were first extracted, collected and examined, and the story of the Antisnatter’s spell, cast through time to kill the Spirits of Christmas Past, Present and Yet-To-Come, was discovered… I cannot imagine any of you found it easy, then, to imagine that one day your enormous task would actually be over and finished. But it would seem that is the case today.

The Spirits died that day so long ago, we know. But we also know they are not dead in the ordinary sense. Indeed, I do not believe that they actually can die. They may have laboured for those intermediate centuries in the form of ghosts, but a Spirit and a Ghost are not so much different after all, and I’m not sure they really resented the difference as much as you or I might. They certainly did good in the name of Christmas, as our esteemed leader knows very well. In the years leading up to 2008, that final date on which the Antisnatter’s dark spell would take its final effect, the Spirit of Christmas still flared up each December, as a result of the electrifying energy that rode on the wave of impending Christmas Catastrophe.

It couldn’t last, not without causing significant damage to reality.

This year, it finally came to a head at the shopping centre. If there even is a shopping centre, and I shouldn’t be astonished to find it gone when we return; in fact I don’t remember with any vivid clarity its being there even two short years ago, though the calendar shop certainly seemed to be. But the whole building bent under the weight of Christmas trees, its walls and tiles bulged and cracked as roots like claws tore rents in its structure and in an almost sweet display of charming festivity, sprouted tiny baubles and presents and tendrils of tinsel as though they were buds, leaves, vines. That this was even possible, that the Spirit of Christmas could become manifestive in this way in the real world, was a clear sign of its approaching crisis.

I feel that the purpose of the Organisation was justified, in the end. Perhaps we did help, and in doing so, I hope the reformed Christmas villains who make up your numbers were able to make amends for their past misdeeds by saving the Christmas Spirit, as the founder intended. But even so, I have a feeling that the Spirit of Christmas has a tendency to save itself, as is evidenced by the personal histories of many of your esteemed members. In this case, perhaps Christmas Present would have opened those Calendar doors even without our guidance; perhaps they would have opened themselves. Perhaps our target, whose safety, health, and journey to this year’s Advent Calendar was our business and ultimate goal, would have found that Calendar no matter what. I can’t help but suspect it.

But these are matters which greater men and indeed agents than I will have already discussed, and no doubt your conclusions are already formed. I speak to the man who I believe to be the head of the Organisation when I say that I saw you arrive at the scene of the Snowman party here at the end of the tale, and you were accompanied by Christmas Past, very decisively real, solid and alive. It is my happy conclusion then that the plan worked, that somehow in being here, in observing all this, our jolly little target (and after all I’ve watched him go through, it seems distasteful still to call him that) managed to actually save the lives of the Christmas Spirits, so that after that crisis point on Christmas Day 2008, they survived. More than survived: came somehow back to life as Spirits, no longer as mere ghosts. I should like to know how this was… but perhaps I will learn in time.

All I can say is that we have done good here, and I am proud to have been a part of it. And now, if you will permit me, I think it’s time for me to leave the Organisation. My time with you was based on my closeness to and familiarity with the target, which I believe has now served its purpose and yours. No: ours, since I have come to learn that your work was of the utmost importance and share in your aims.

Of course, the Spirit of Christmas does not endure all year round. A Christmas tree loses its relevance quickly into January, and tinsel is packed away before too long. But the Christmas Spirit never quite dies, but goes into hibernation very shortly after Christmas is over. We didn’t feel quite in the mood to watch it take place here today, and so my colleagues and I, as you will have observed, opted to consume the sticks of treated edible material Agent Beazie introduced us to, which have that secret ingredient that allows an Agent to fly up and away, and in our case, back to our respective homes. Beazie was careful to tell us what dosages were safe, so that we don’t find ourselves hurtling all the way up into space, the fate which befell him before he was made an Agent, and was responsible for his ruined body.

But I confess, just before we left… I felt compelled to watch our target walking happily away. 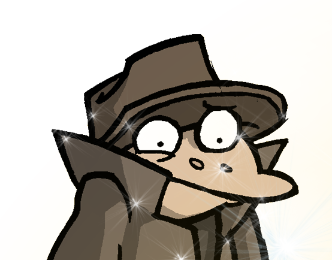 He waved to everyone as he walked towards that final door of the year. His face was lit up with its usual infectious festivity and, just as last year, with his last friendly “Goodbye mates,” he was simply…