“Speak,” go Burgess. I think he knoe what she’s going to say.

“When you set out on your adventure, I had you pull the Runcible Spoon from its plinth. Was it easy?”

“Yeah,” go Snatrer, “it just slid out, exactly like a normal spoon in some ice cream would.”

“That was not ice cream! It was the densest rocks of the northern hemisphere, and made more solid still by magical influence! (and also they happen to look exactly like ice cream but that is mere camouflage.) No-one in the world could have drawn out that spoon, no-one save for… the Snatter.”

So he knows he really IS snatter! But the knowledge seeeme almost too much for him! He stagger and stumble backwards, he gasp and gulp! And he crash backwards into …

into Beazie. The teenage beazie who works in his lab all the time on potion. He ask Snatter what the matter is, and Snatter stumble away with him, talking. Rose join them. Rose and Beazie look concerned about snatter. They might be good friends to him, even Beazie!

And a man arrive now, it’s the Herald of Christmas, Noddy Holder. He’s there with his friend Mr Blessed the Noise Marine. Together they have a little friendly battle taking it in turns to shout loudest:

and Christmas it is.

And look! Look who here too! 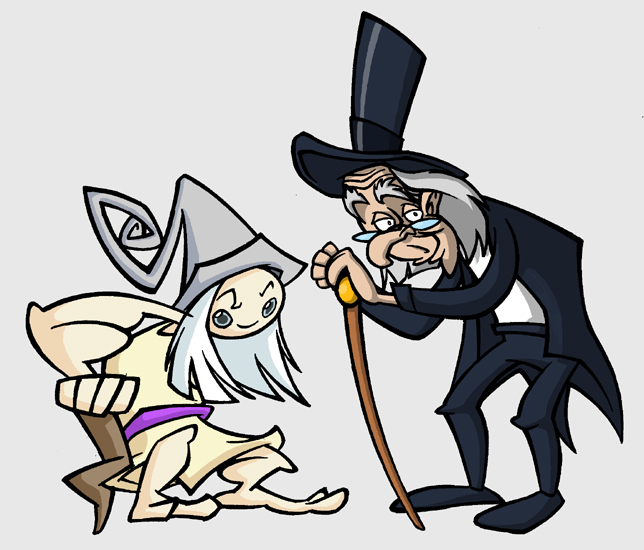 It’s the Accounts Office bloke and a friend! They’ve come specially from the future to see the party hurray! Everyone’s here!

Well! I think that clears things up nicely. I feel much better now! I feel all christmassy but then I USUALLY DO, hehe!

I think on that note I can brave the WAY OUT dore! Come on! Er, you don’t have to go throu, you’ll probbly just ping off, like the nerds and ppl are doing, but I’m going through the doore okay! Here I go! 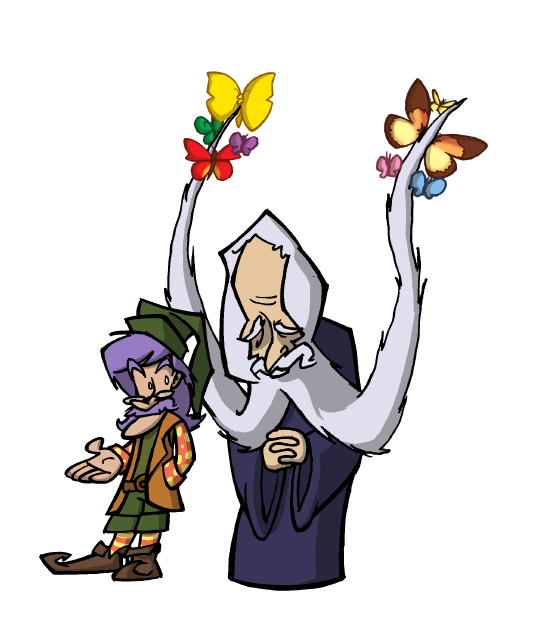 “It was risky, oh grand High Elf, I admit that. But I knew the Loompas were ancient enough and traditional enough in their beliefs that they would be able to raise a Titan for our side. The Snowman was so fond of the idea that he begged me to allow him to pilot it, feeling he had something to make up to his people. I don’t see why, I never really knew why Bowy and Henson had to hide him away, but it is no longer the case. I have spoken to them and they are very happy for him. They will visit us whenever they can, and I imagine Snowman will be the man to help them get here. We can expect them at future Season’s Greetings celebrations, I am sure and certain, certain and sure.”

“Yes, as am I. And perhaps more Titans might be raised.”

“Just what I was thinking, your ancientity! Titans to encircle the Grotto and guard it… perhaps one day! But there are other concerns, are there not? Since he returned, Claus has been speaking of the Spirit of Christmas. He seems to be concerned with the welfare of the season, as though its Spirit were in some way inaccessible to him. Is he right?”

“In a sense, young Dooley. But in a very real sense it doesn’t matter. It is not whether Kringle and the Spirit of Christmas can communicate in a direct sense that counts, but that they are ever near one another. As long as the Spirit follows Kringle in his adventures, all will be well. He will spend the rest of his life seeking it, and it will seek him. I don’t dare guess what would happen were they ever to meet, how he would react.”

“There really is a Spirit of Christmas then? A person?”

“Oh yes. Somewhere. We may never see it, but it is rarely far away.”

“As do I. He has shown every quality and passed every test to prove the idea true… all except one. There is one further challenge a candidate must conquer in order to prove himself the Snatter, but it is not one I shall ever ask of Kringle, or of any other. It is something he must simply do, of his own accord and in his own bravery.”

o sorry, I wasn’t really listening, what were they on about? I got distracted by Snatter and Rose. Snatter looks shaken and scared, Rose looks longingly at Snatter, and they’re listening to Beazie tell them what’s in his potion. He looks very serious. Wonder what potion does.

Well I think that is enough for this year! I’m going out through the way out dore now! Yes it’s very close.

Only a little heev needed and it swung open, i think it’s really time i went.

bye then! bye everyone!