Wowww looko! We’ve landed and Here we are outside the Christmas Grotto! Look! There’s the door into it! Yaaay me and m8s and all our m80s at Elf School, it’s like the good old days!!

I can see some cows outside, they keep those there to make the milk for the chocolates those two elfs are making, and look up there in the sky, the Christmas Star in the distance! It’s just over halfway up in the sky, look!

And there are some Snowmen! It’s the ppl Snatter met at the start! There’s the Snowgran, and there’s the little girl one, and the party hat one, and the cowboy one, and a top-hat one and a chinese one of questionable taste, all sorts of ones! Come on! Let’s listen in on their conversation!

“Big as a hundred igloos, it was,” say Snowgran. “Bigger than a a barnloo! Bigger than a cathedraloo! One giant, claw-like hand, and a cannon on one arm, it filled the sky with its great metallic body, and its roar shook the stars in the heavens!”

She must be talking about Mecha Snatter! Remember him? He was the most frightening thing that ever happened! It’s a good job he never turned up last year, because Snatter wrapped that big present he was in, the one that we never found out what was in it.

…hang on, that’s a bit weird, how do I knoe mecha snatter was even in there anyway? o never mind!

“They say,” Snowgran carry on talking, “it was summoned by… the Antisnatter.”

The Snowppl all make little jeery noises! They don’t like him!

“Grannyyy,” say the girl, “who built Mecha Snatter? Was it that rotten Cursed Snowman again, the one who made us melt? He’s horrible!”

“No, no, t’wasn’t him! Nobody built it,” goe Snowgran. “There were once titans, who walked their world the same way you and I do. Great gigantic men and beasts made from metal and rivets and screws, oiled and sparkling. I know about this because I have a twenty-eight-year-old son who never stops going on about them. Their kind eventually fell out of favour, and they are remembered now only in legend, and the ongoing fables told by Snowman Firman and Icicle Bay.”

“Well, because nobody believes in them any more. That’s why.”

and then they look up… because a figure has appeared in the distance! 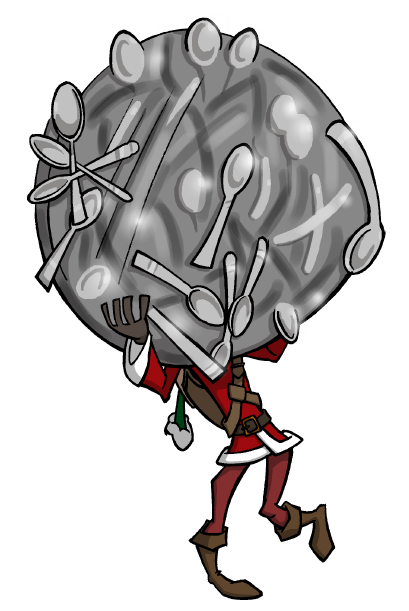 Could it be? Him carrying millions and millions of spunes! He crosses the snowy plains, trudging, watched by the cows.

“Lo!” say one of the cows. “The Chosen One approacheth!”

and while the cattle are getting on with that,

Dooley appears at the door of Elf Grotto, and he goe, CLAUS! IS THAT YOU! they call him his middle name because they were all chummy at school, plus it was less confusing because there were lots of chrisses there, there were masses of them.

I’ve got a load of spunes here.”

“Ye i can see” go Dooley and welcome him in! Let’s follow in!

“O Claus,” say Dooley, “your presence here will boost the general Christmas feeling enormously! The spirit of Christmas is in a sorry state, sad to say. Ever since we learned the Antisnatter was going to attack, things have felt unpleasantly hollow.”

So that’s funny, it looks like Snatter has already done his whole quest! Did we miss it?

We must have lost it on the way into the Calender! O dear I hope we haven’t lost it, that Account Office bloke was already grumpy enough!

m8s I’m going to scout about for it, you hang around here, brb 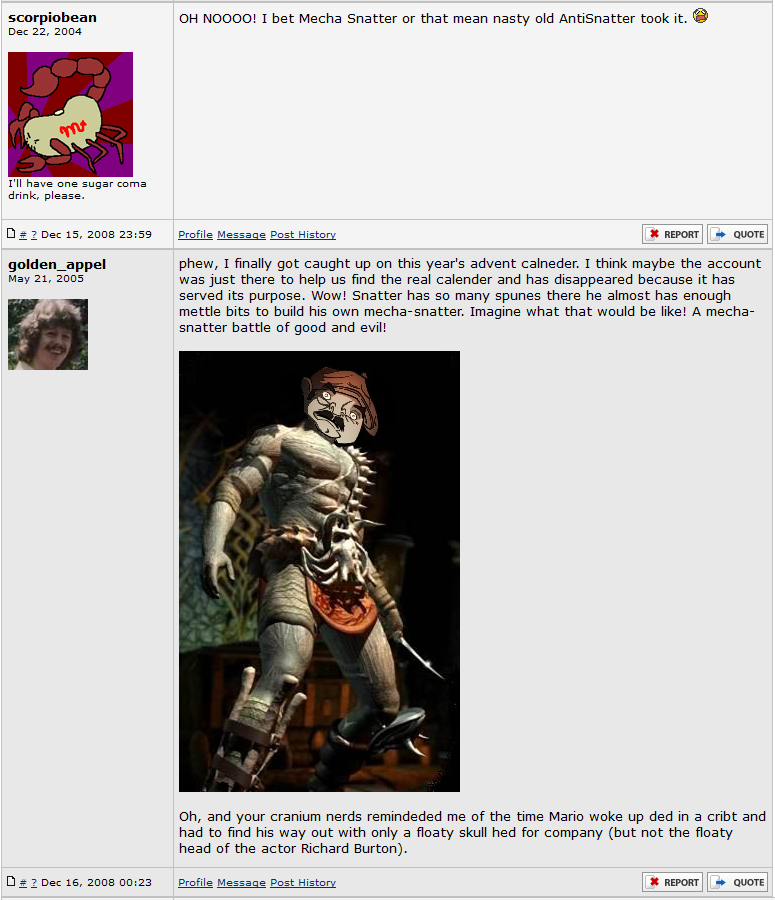