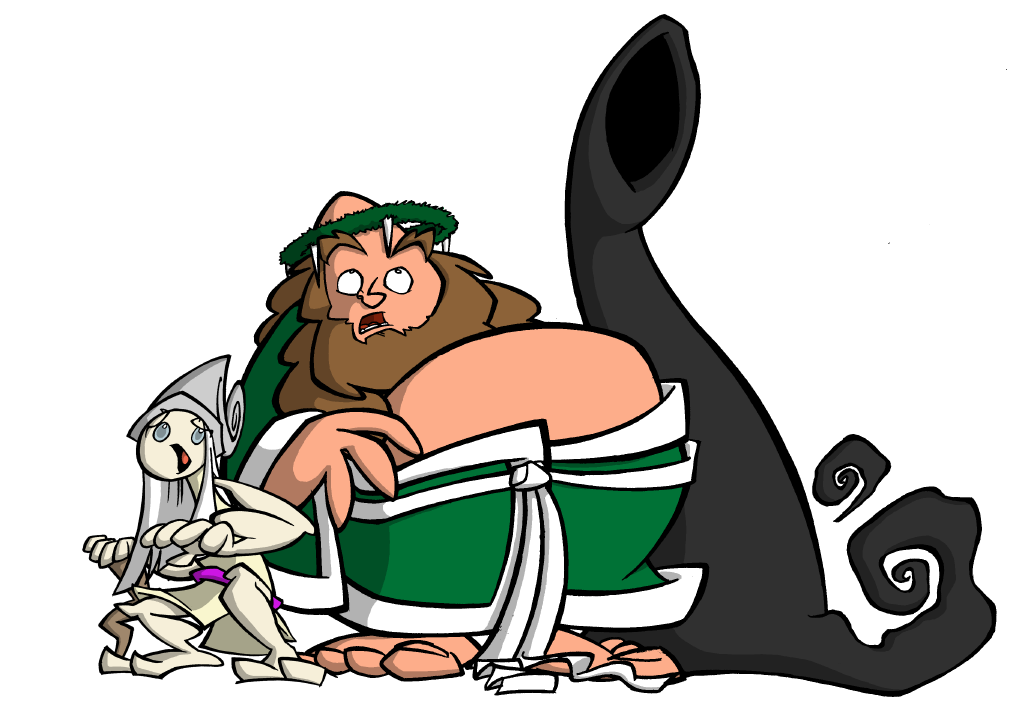 Well we knoe all of those blokes! Look! There’s the scary Christmas Future bloke who showed us what it’d be like if nobody did anything to sort out the Antisnatter look, and then in the middle there’s the big hairy one who was opening Dores in the calender for us and trying to guide us there, and he was asking what it’s like to remember things other than Christmas.

And then look, it’s the funny bloke from the Accounts office! He was the one who kept all the stories about christmas in the past, and he was asking what my mum’s name was which i thought was a bit forward, maybe he was looking for a date! He does look a bit old. Well, noe, he looks young, but sort of like old as well. Like a child, but well, not so much like a child as like an old man if you’re looking at him weird and he looks like far away and only about as big as a child. OE IT HARD TO EXPLAIN. He’s just really weird and he makes me all sort of regretful and uncomfy. and proud. HIM WEIRD.

They all look quite scared looking up at the big robotty fight, it seems to really bother them what’s going on.

“This must be the day Future foresaw,” say the accounts office man.

“Did he?” go hairy, “I can never remember these things.”

“Yes, the Antisnatter is at large, and he plans to do some terrible thing which will kill us, though not at first.”

“Kill us but not at first? What on earth do you mean old boy?”

“He has some devastating trick in mind which is calculated to destroy the Spirit of Christmas.”

“No I know, it’s puzzling if you’re not used to it but yeah, that’s basically it. He’s going to do a thing that will kill us, and in doing so, kill the Spirit of Christmas. So nobody will be Christmassy and Christmas will just die! But he’s going to use our power to do it! He’s going to somehow fiddle with the very source of our powers and utilise them to ground his spell in some other Christmas, past, present or future. He’s going to use our powers like the faces of a tossed coin. Where – or should I say, when – his dark spell will land once filtered through our Christmas magic, we cannot know. But on that date… we will die.”

“So it can’t be in the past then. Otherwise we’d be dead now.”

“Would that time were so simple. You are lucky that these concerns are not yours, that you deal only in the present. But I am burdened, as is Future, with the more complicated aspects of that labyrinth we call time.”

“Whatever do you mean old chap?”

“Every Christmas, you are renewed. You exist only in the moment, not like one man walking the linear path through time, more like a series of brothers, each close in resemblance to the last but not all identical. There is a continuity to you, but it exists only in present time. My existence, however, stretches out into the past. Whatever has previously been, those days are like stepping stones along which I walk with ease. Christmas Future, of course, lives in the yet-to-come.

“For example, in a far-future time, he is undergoing a project that occupies his thoughts even as he stands here now, just as if he were currently busy with it. That’s why he’s so distracted, it’s why you can’t get a conversation out of him. He is too busy trying to consume a positive outbreak of Christmas Spirit which has overrun a particular shopping centre. He tells me that vines and roots and Christmas Trees have worked their way through every crack and crevice of the place, making the building its own, infesting it. Little presents and baubles are popping up everywhere, and the structure of the shopping centre is being torn apart. He tells me I’m there too, helping him. Myself and Future have been trying to consume those manifestives, trying to incorporate them into ourselves. We’re the Christmas spirits, it ought to work…

“But there is too much! I fear the project will be a failure. Worse, I fear it must by necessity be a failure, because that flaring up of Christmas Spirit is no good thing, it is a sign. A sign that Christmas is going overboard in that particular year. Death-throes, perhaps? Could it be that the year 2008 is the time when it all ends, the year in which the Antisnatter’s spell found its anchor?”

“Hang on, hang on. He’s doing that in the far-future… along with yourself? How can you be there, so far into the future? You deal in things of the past, surely?”

“My friend, whoever suggested that this is the present?”

“Hmm. You have a point. But look! Who are those people? What an unpleasant effect they appear to have over the good Mecha Snatter!”

Ther’e looking at all the craniums who are scrambling over the snowy hills towards the two robots. They hate the robots! Look at their cross faces, they’re snarling and proclaiming – well they’re not, but they’re doing the equivalent, for them, which is they’re talking very quietly and not looking at each other. And you can tell both robots are feeling the effect, but spoonsy mecha snatter is bigger and has more power behind him, so he is not very effected by criticism! But good Mecha Snatter, he might well die! There’s actually a good chance that he might succumm to their grumbles and die! Noo, he’s really nice! They should definitely give him more of a chance before they pre-judge!

O no! Him fall down!

Good Mecha Snattre have been defeated by spoons Mecha Snatter and the grumbly ppl! O noooo! There were enough of them to make a difference, and now we’re doomed to be taken over completely by the big spoonsy one instead of the really good one!