It’s the WHOLE CALENDAR! THAT’S WHY I COULDN’T FIND IT!

Peel back the very side of the advent calendar itself – for the WHOLE CALENDAR makes up the final door! The WHOLE THING peels away!

And underneath, as this glorious final flap peels aside, we see an entirely new scene! The stable has gone crazy! The people within have gone bonkers! 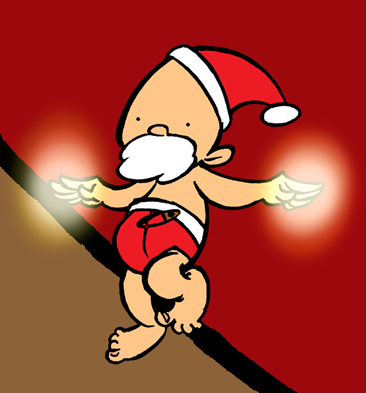 Baby Snata has lifted into the air and is firing laser beams! Daddy and Mummy Snata are fighting with Lightsabres! Dooley isn’t being wee’d on, he’s got a Wii for Christmas! The Snowman is here but he’s a bit older! The Snorks are attacking from space! Burgess Meredith is floating around, carried by his butterflies! The Mecha Snata has the whole stable gripped within one gigantic claw and is slowly crushing the roof! The radioactive spider has turned a different colour and is handing out presents which are really alien mutagena which will take over the bodies of anyone who opens them! And above all this, the beaming face of sant nick grins down from space, wearing his trademark red hat and electronic internal face implants.

HERE IT COMES! THE FINAL DOOR, FOR YOU TO ENJOY!!