We are outside today, because today’s lesson is an outside lesson.

But first, I can see Dooper over there helping Snatter with his flying. Remember he saw Snatter be sad and offered to show him a trick? Well he’s showing it him now!

“Be sure your hands are steady on the reigns, Kringle! Steady! You can’t lose confidence or the reindeer will feel it. Get some speed… that’s right… now pull! Pull up!”

Snatter pull on the reins and… 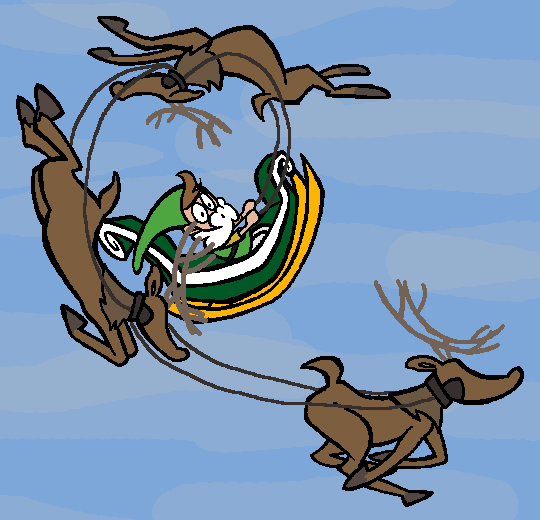 Snatter did it! He did Dooper’s special move, which is called: The Dooper Looper.

He gets out of the little slé once he’s landed and does a little jumping dance! Dooper tells him he did really well and that one day he might be good enough to try the Super Dooper Looper.

“Imagine a great wheel in the sky, a grand circle traced in the stardust trail of the reindeer. It’s a heck of a tricky move, because you have to keep those reindeer confident all the way up, and keep them flying fast enough that the centrifugal force keeps you in your seat on the extended upside-down stretch. But if you can do it, it’s really, really stylish.”

“Wow, I don’t think I’ll ever be able to fly like that, Dooper!”

“Oh, never say never! One day, maybe you’ll be better at it than I am!” and Dooper give him a little pinch on the cheek and send’s him on his way.