Look look! Look! It’s been another day! The snad is running out again, in the snad timer! It might be time for another bit of Account!

I wonder what today’s Account will be of, or if it will be the same one again. It was quite an interesting one and we got little eatey igloos and that’d be good again.

It is being reveeled! Well… it still looks like the igloo village… And a distance away from it are the Snowmadic tribe, and they’ve got the red man with them… It looks like it’s more of the same story carrying on from yesterday! Let’s listen to them.

The Snowmads have given the beard man some snowbroth or something in a mug, and he’s shivery and talk to themy. It looks like he has asked about why it is that these Snowmads have to walk about and then be in shelter when the sun’s up and stuff, because the Snowgran is going off on one again about the Cursed One.

“We hate the Cursed One!” she sae. “He who did some sort of thing! And now we’re cursed! And every day we shake our twiggy fists at the ground and the sun and sky, and the memory of the promising young hero from Elf School who really looked like he was going to be a great big hero and then he just swanned off! And left us all to melt!”

A snowman with a party hat on goes, “Snowgran tells it like she sees it. We’re all that’s left of our once thriving civilisation. Every day the sun comes, and every day more of us melt away. Her husband was one of the first.”

Red-hat does a gasp! “But you’re reborn?”

“Yip,” say the cowboy one, “Yip-tootin’. But not here. We gets rebuilt in far-off lands, the like of which Ah daren’t speckerlate.”

“Because they fly back here,” says Snowgran, “every Season’s Greetings. All of them… except my husband.”

“Grannyyy tries to be the one to make grandad again,” say the little girl one, “her hands are getting more and more like human hands, so she’s good at patting snow into Snowman shapes. She tries and tries, but all she ever makes is a lumpy snowman that doesn’t look like him.”

“The curse just doesn’t guide my hands like it does the children of the wider world,” says Snowgran. “If my Raymond is out there, he’s beyond my reach.” 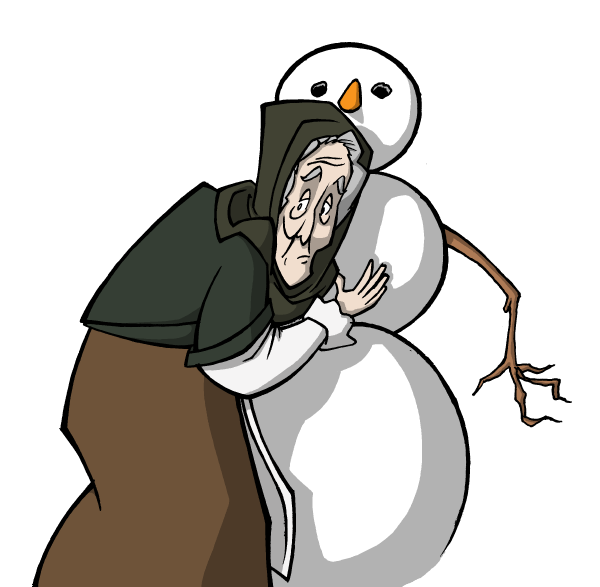 Red hat man looks sad at this. “Season’s Greetings?” say, “Is that your winter festival? I’ve got a lot to learn. I thought the Snowmen of these lands celebrated Christmas.”

“We did… but the spirit of Christmas,” say Snowgran, “has been tricky to find of late, around here. Where have you been for the last few years that you don’t know that?”

Red hat man takes a sip of his snoe broth and tells his story… Oe it’s fading into the story!