Okay then, I’m annoyed now. Okay, it’s been nearly a week of this, and there’s still no calendar. I’m about ready to give up on this. In fact let’s give up. Let’s give up and just blimmin’ jolly well go home.

What is that movement in the corner of my eye? O! The Account! Yes I forgot we turned that over didn’t we! Maybe something interesting will happen now SNATTER’S here.

“I think,” says Snowgran, “maybe it’s time you got back to your friends. And took a little something with you, from us.” She give a meaningful nod to a Snoman with a party hat on. Wonder what that is?

“My friends!” He say! He’s look around at all the destroyance that’s happened to the North Pole in the seven years he’s been frozen in time (but also growing older while frozen in time, and apparently working with a dietition), and he say, “I’m not sure I’ll have any of those left…”

Poor Snattar. I hope his friends are okay tho!!

Oe! The scene is changing now! Finally! All the little ruined igloos and snow hills are disintegrating around like they’re made of snad, they’re collapsing and wooshing about, and making shapes and then wooshing away again. There’s a big snowflake! That collapse and go wooshy away. There’s a … oe, a little version of the sand timer account, and that wooshys away. And there’s a sphinx, don’t know why, that woosh away too… and now it’s wooshing into…

…I don’t know! It’s a load of buildings on a snow hill! It looks really Christmassy whatever it is.

Oe I’m getting knows in my head again: the knows of the account, appearing in my brain! This is ELF SCHOOL! where Snatter was taught and met all his friends and had adventures! Or, it used to be! But something has happened, something bad has happened, o my friends this is terrible! THe head of the school has received a threatening letter down the chimney! It is a terrible letter, full of bile and rage, and it is from…

Yes, the Antisnatter, that foul horrid person who attacks Christmas! I read about him once in my Snatter book, and I sort of have a feeling we might’ve bumped into him last year but… actually we didn’t, because nothing happened last year really, did it? Except that we felt a bit funny about Dooper, the lovely old teacher who is not dead, and a big present didn’t open. I think the present was to do with the Antisnatter though, and if it had opened, oooh there would’ve been trouble!! Lucky it didnt!

But now Antisnatter has said in his nasty letter that there will be a huge and terrible attack on Elf School on the dot of Season’s Greetings, when the Christmas Star is at its highest bit of sky! (This is called Penrith. Sorry, Zenrith.)

So they’ve Fortified it! It’s not just a castle now, now it’s been all done up with extra big walls and bits all over it! They’ve built a big workshop where they make weapons and defense things! It is called the Grotto!

(it is called the grotto because they saw some dittoes chasing dottoes in, quoting mottoes.)

So to give you an idea of what we’re looking at, here’s where the original Elf School building is in it:

there you go see, that makes sense doesn’t it.

Right! Let’s look inside! Woo the sand is whirling around again and making new shapes. Now we’re in a dark corridor, where the moonlight makes beamy lines from the windows. A little man is going down the corridor, who is the little man? He is an elf…

IT’S DUDDLES! Snatter’s good little m8 Duddles! But Duddles is a man now, just like Snatter!! Omg! He’s going to see his best friend. It’s not Snatter, it’s someone he’s been working with for years, first at the Elf School and now in adult life at the Grotto. 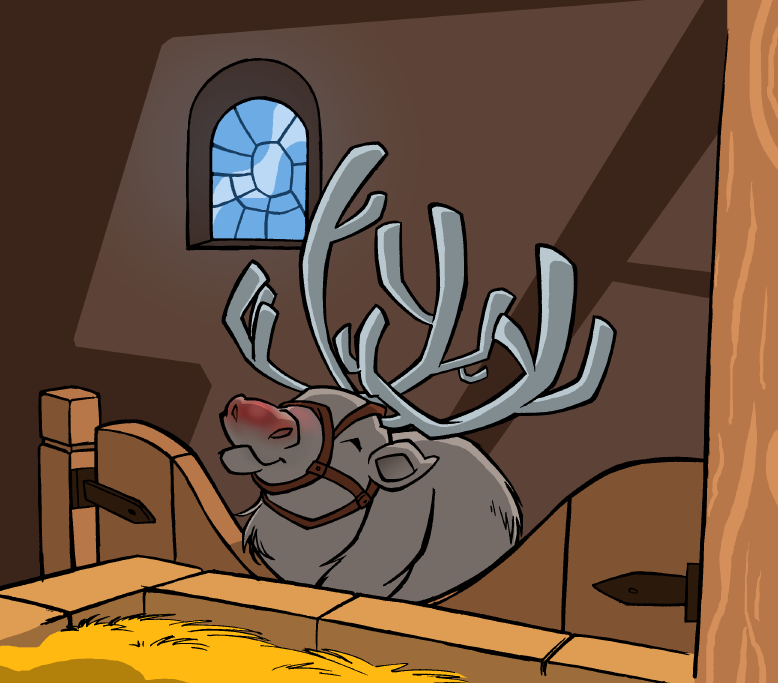 it is Rudolph, the Red Nosed Reindeere!! He was at the original birth of Snatter and he had lots of bottles of booz with him, that’s how he got his red nose. Hehe he’s drunk!

He is a bit of an alcoholic truth be told, and all of the other reindeer go “moh” and call him bumhead, and they play reindeer games. Like the reindeer game where they dress up as policemen and raid his pen and say they’ve heard there are drugs in his reindeer food, even though there isn’t (except magic flying dust but that’s meant to be there). They’re not very kind, these reindeer games, but the thing is Rudolph does shout at them sometimes, what with his temper, and it’s not very fair.

But it’s all right because he’s also really funny, so all of this is just artistic expression. And being drunk doesn’t make him too much less funny so it’s good! Look, he’s being funny right now! Hehehe, Duddles is sitting with Rudolph trying to eat a sandwich. And Rudolph keeps saying funny things, and Duddles is trying not to laugh in case he spits out his sandwich!

MOHHH LOOK AT HIS FACE, trying not to laugh at Rudolph! MOHOHO, he’s really got the giggles now! Rudolph goe, “Are you enjoying that saandwich?” and Duddles goes MOHH but tries not to! HEHEHE LOOK AT HIM GIGGLING And now he’s giggling so much that Rudolph doesn’t even have to say anything any more, he just give him a sudden look at him like this: 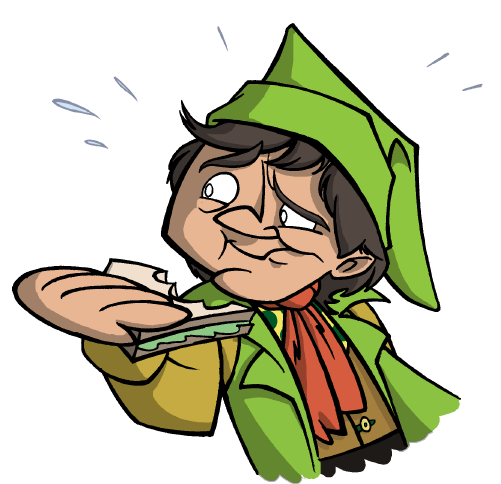 They are a pair, old Duddles and Rudolph! Ohh it’s great to see Duddles again, haven’t seen him in ages! Look at him, he’s not even much taller than when he was little, heheheeh

O and look! I can see a chocolate Rudolph for us to eat! But I can’t get it, it’s inside the Account!

Oh this is lovely tho, it almost makes me forget the elf school is doomed when the Antisnatter attacks! That’s not for ages thoe.