Come on maties, what doyoug uess the cracker titan got for him Xmas present?

Dunno. We will find out later when the sand runs through th – – O NO

I forgot to turn the sand timer thing over m80s! O no! Now we might have to wait for ages for the next Account, two days! GAHH

stupid sand timer i will KICK IT

…o dear the sand timer’s going a bit funny now like before! The empty one at the top is going All fuzzy and making strange shapes in swirly purple clouds! But oh no, I’m really worried I might have broken it, because it shouldn’t even be ready to go yet because all the sand is still all in the bottom (hehe bottom)!

Strange, an image does seem to be resolving. But what image could a sand timer Account show us when it hasn’t even been turned over yet! What could it show us? Not the next part of the story surely, because it hasn’t loaded yet, it’s all in the sand! There’s no sand in the top bit! There’s only not sand in there (air)!! What story could not-sand tell us?? Surely not some sort of not-account, some sort of warped, inverted nega-story??

or maybe a story… 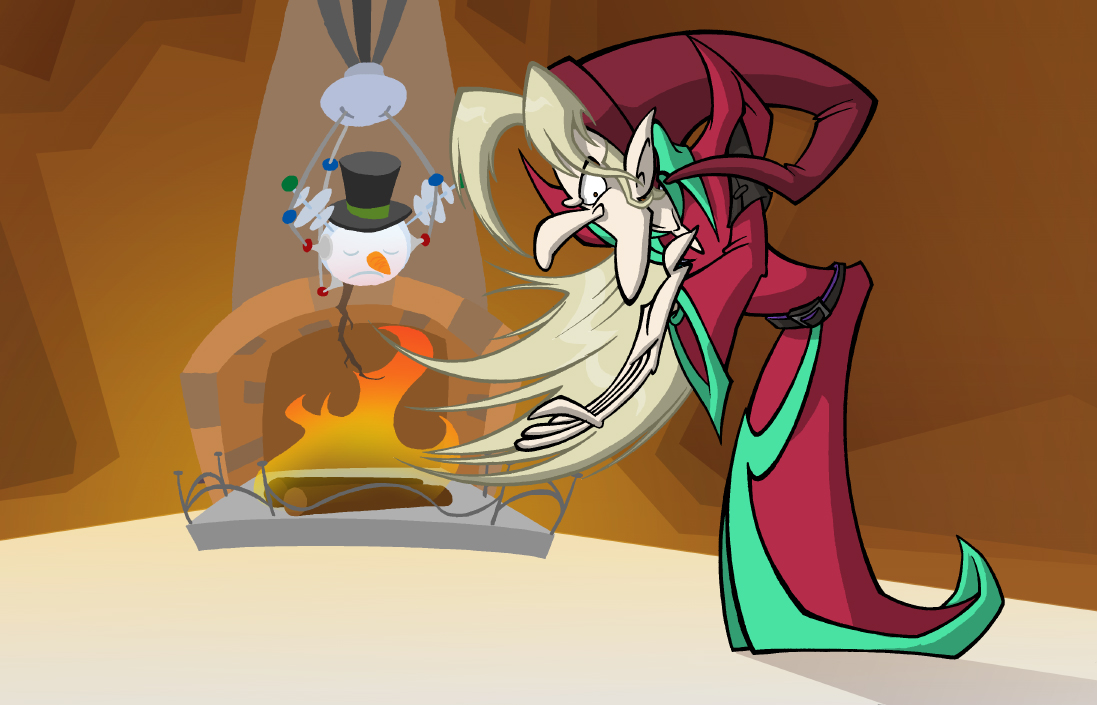 That terible fiend the Antisnatter! His identity is unknown, but he’s really horrible! He im am massive great huge terrabumhead!! he’s a petabumhead!! What a clump fudge! why if i ever saw him i’d render such scroggage to his nally-twacks you’d never hear the end of it!

Look at him now though, with his stupid hair and his stupid chin, he looks like the most twiddly of villains. I bet he sways about and twirls his little hat and goes “heh” and acts like he’s all superior! I HATE people like that!!!

So here’s the stupid horrid Antisnatter and as the room resolves around him we can see that this guy is such a scampi-pamphlet that he’s actually built himself a Snowman torture chamber!!! Look at that guy’s head suspended over a fire, euuhh you can see his spine dangling down and everything oh criminy!!

I bet this is where some of those Snowmen have been disappearing to you know. I don’t think they did all melt because of the curse! I bet!

“Har,” he goe, “hurrrr.” oh noe he’s got a voice that’s all smooth and slithery, i knew it! “hrrrr. Soon all of Christmas will be under my spell, hrrrrr. Hr. Yes! YEs! My plan is all going off! Hah-herrrr! Yes. The only thing that can defeat me is the Runcible Spunes, but they are scattered to the winds and guarded by my unbeatable monsters! Harr! No weapon can kill them! Nobody stands any chance at all of getting past them herrrrrherherrrr!

“Right, now I’d like a cup of tea. Where’s the boy who makes my tea. BOY WHO MAKES TEA!”