Wel. The sand is still going through at normal spede. I suppose we’ll have to wait until tomorrow to really see what happen next to Snatter. At least we got to see what the Antisnatter’s up to today.

Here is what Snatter gave the cracker monster: 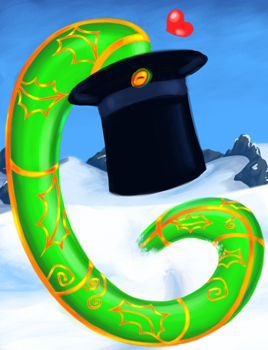 It is a special hat, so that nobody can pull its little crackery bit and pop him! That’s the only reason he’s cross and scary, because he’s scared of people popping him! Now they can’t! Thank-you, Snattar!

Well, nobody quite got it right, but Kula Bocca got close with saying he wanted paper hats! So Kula gets um, well, we haven’t got any chocolate today because the Account isn’t ready yet, but next time we have some chocolate then – o! Hang on, wait!

the sand in the timer is whirling up even though it’s not in the right half yet! It’s whirling on both sides! O dear does this mean Antisnatter’s plan is somehow working already and his story is inextricably entwined with Snatter and his friend’se’s?

hope it’s not just that you lot have bashed up the funny man’s sand timer tho.

O, it’s resolving into shapes. We’re going back to Elf School today by the looks of it. And… why! Here’s someone we haven’t seen this year! It is the Head of Elf School! 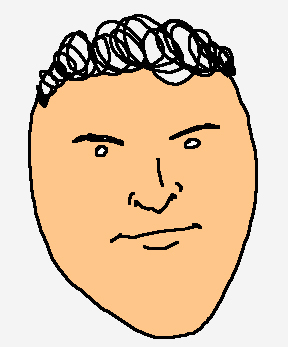 The Head of Elf School is the Head of the actor Richard Burton.

The Elf School has been rebuilt into a grotto this year, and Richard Burton himself has also had an upgrade. A special effects company called Image Metrics has upgraded him and now he is:

look at him go!

Well he’s tasked with the task of trying to work out how to train some sort of elf army to fight against the hordes of the Antisnatter, assuming there are some. I mean how is the Antisnatter actually going to attack? We know he’s doing something with snowmen but snowmen wouldn’t make very good soldiers would they? I mean they’re made of snoe. So I’m not sure what he’s doing. So to not take any chances, the actor Richard Burton wants to somehow make the Elf’s ready for a FIGHT.

So they’re building all siege weapons and stuff in the workshop day and night (and putting up decorations in their spare time but there isn’t much of that), and so there we go. So the Head is whooshing around trying to work out what to do!

And on the way he wooshes and bumps into a locked doore! Hehehho. I bet it’s the door Dooley couldn’t open, but i dunno. You wouldn’t expect a dore in Elf School to be locked to the Head of Elf School but maybe it’s one of the new ones and they made it wrong never mind.

So. Him decide to ask the teachers if they have any ideas how to make Elfs ready to defend themselves in a Christmas War. So first he goe to the loudest teacher, because he likes to say things. He is the Beard Growing Master, Mister Blessed.

(They are an old-fashioned school at Elf School, so they still call a teacher a master*)

“Hullo – do you know how I could make it so that the Elfs are okay if the Antisnatter attacks the school? They’re not very strong you see, they’re only elfs.” 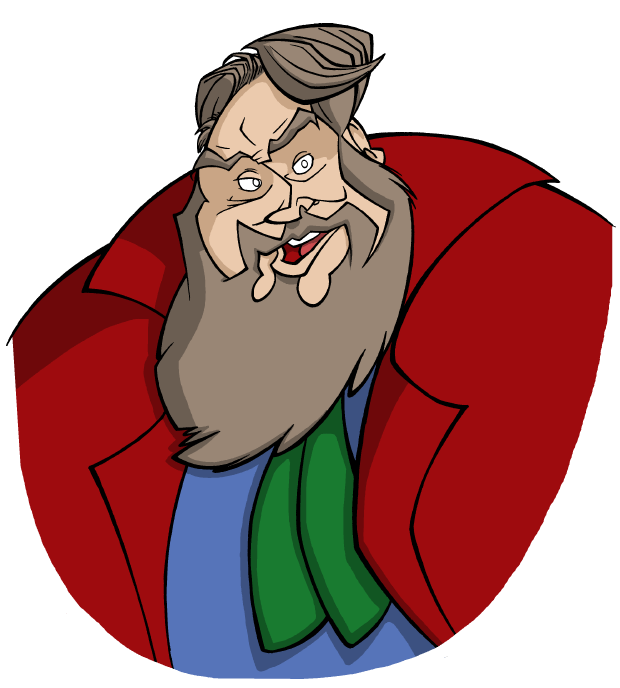 “HMMM, OH I DON’T KNOW DEAR CHAP!!” he say sadly. What a shame! So Richard Burton wants to try other teachers.

He’s got a point there, so richard burton’s head goes off to find the PE man.