Wow this is really exciting m80s!

The snowmen who were here must be from all the different snowmen tribes! It seems news travels fast in the snowman world, because loads and loasds of tribes have sent reppersentatives to stand around here and wait to find out what’s going on

and then we did find out what was going on, didnt’ we! Did you see? The Snowmads flying back with their gest of onner, which they plopped down on the flore and then snogran and the one with the cowboy hat on and the party hat one, and all of them, explained to everyone just how much of a gr8 m8 Snoman is actually, and that they shouldn’t call him the Curssed One any more! And Snatter was all “Ye!”

And Snatter declare open the first Season’s Greetings Snoman Party since the great divide, and now they’re all doing a big Christmas party for the first time as one big great huge Snowman race once again, unified and happie!

And then the Head of Elf School, Richard Burton, come hurtling over and he go “KRINGLE! My boy! No-one would have believed, in the last years of life here generally, that Christopher Kringle hadn’t been killed by the horrid hands of fate! And yet, across your chuckly face, beard immeasurably superior to most of ours grows with endless fluffiness, and slowly, and surely, you’ve saved our world again m8. Three hurreys for snatter! Hip-hop: hurrey! hip-hop: hurrey!”

And Snatter get: HIS DIPLOMER! Because he was trapped in time for graduation and that! It’s an honorary one because he didn’t do the exams and such but he deserves it doesn’t he!

And now here we are at the SNOWMAN PARTY!! yaaay!

they’re playing music, and it go doobe diddly doobedoo bedoobediddly doo beedoo. And everyone’s dancing around, get in a ring and dance, go in a line and dance, do-cee-do, tum-tee-tum, and have a great big old snowy christmas dance! Hurray!

And here come elfs and stuff, and everyone have a big dance around!! YAY 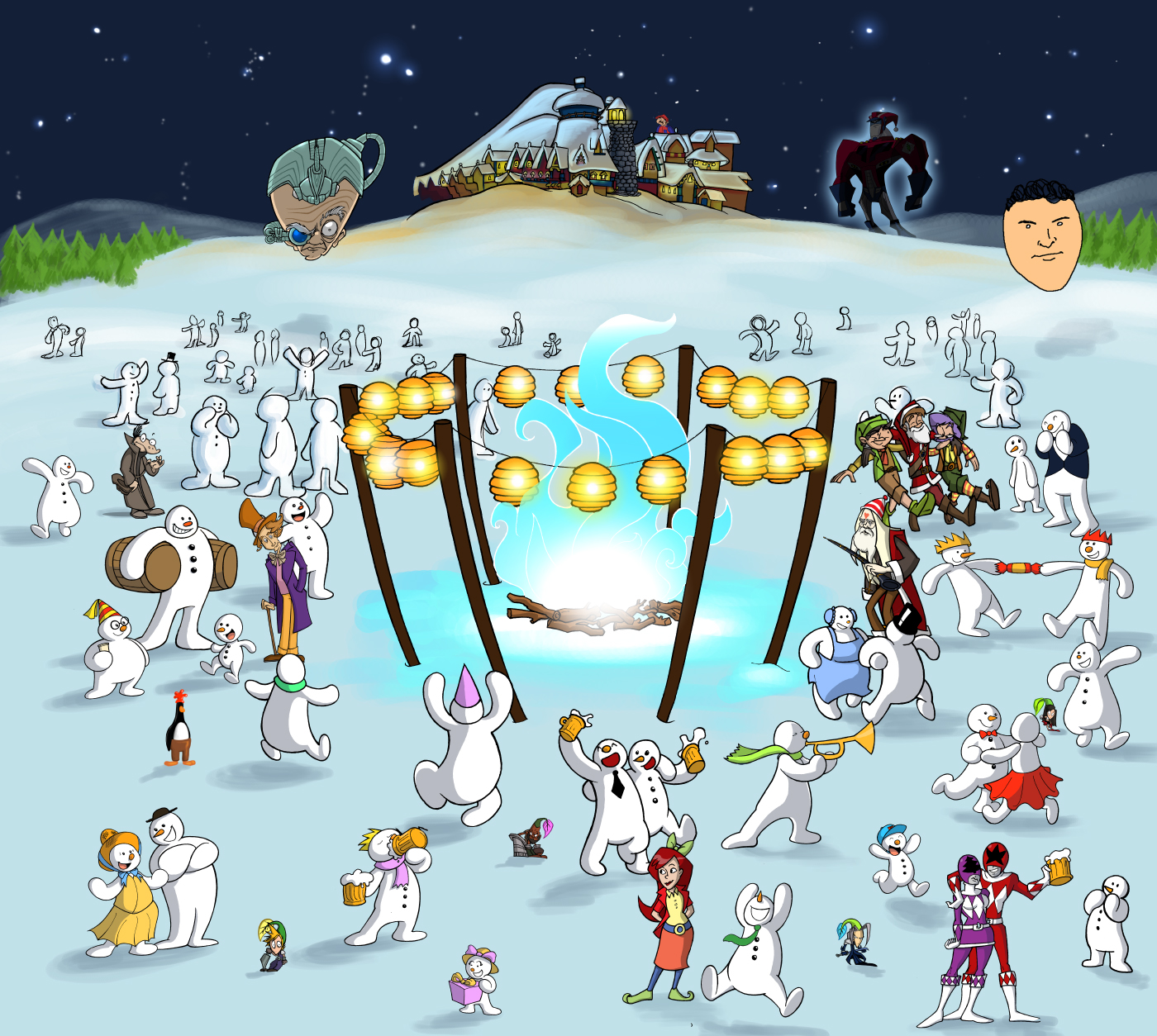 (o i can see some of you are over there at the back, on your phones. you should look more closely at the party if you want. By pointing at it and clicking it. Walking closer to it I mean.)

O but who is this? Some snomen are flying along and they are dangling an oldy looking man with them.

they set him down… 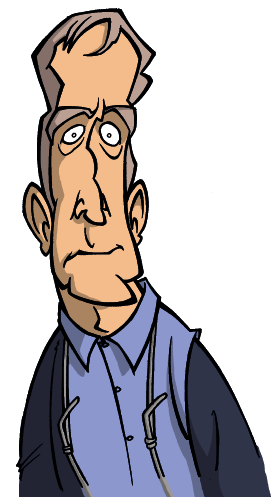 Who is man? he looks sort of weary but he have a twinkle in eye like he can make you go

whenever he want. i wonder who he Is! I don’t noe him… but Snowgran seems to

her eyes go BING and little icicles appear under, and she goe:

and she hobble over and stumble, and try to run but she old, and raymond have a little stumbly over as well and eventually they stumbly into each other, and there’s lots more icicles

This must be her husband that she kept trying to rebuild but the magic wouldn’t work! But that’s why it wouldn’t work! HE NOT DEAD! Raymond Snowman DIDN’T succumb to the curse yet, he have survived, and survived so long that he’s one of those old snomen who are so old they just look like people, such as old old snowgran, and old old little baby girl!

And here come with the snowppl, T-SHIRT! He had been trying to save Snowmen and thought it didn’t work, but it DID! They did survive, even tho they were melty and that, and they built each other up more, and then in all this commotion they went inside with T-Shirt to find Raymond!

“He was in the queue,” T-Shirt say. “The Antisnatter was going to experiment on him next. He was spared because the Antisnatter found what he wanted before it was Raymond’s turn. But he couldn’t let him go free.”

o, because he knoe too much?

“No, Antisnatter’s just an horrid bumhead. I think he was going to melt him down once Christmas was destroyed. Either that or just let the sun do it as the whole of Lapland thawed.”

You are very brave t-shirt for saving him. Nobody thinks you’re bad guy T-Shirt, we noe he enslaved you!

Oe this is VERY HAPPY.

And Snowgran take some snoe, and she put it on raymond, and raymond put snow on her, and it’s like a big cuddle they’re doing but except it’s putting snow on them until… 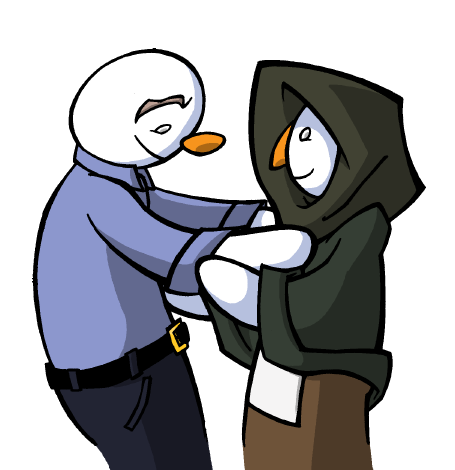 Oe that is nice! They’re young again! Back to their youthful selves from before they got so bogged-down with curses and crabbiness and all that.

I’m really glad I stayed, this is all nice things happening!!

And Snowman watch happily, now friends with all of them again! 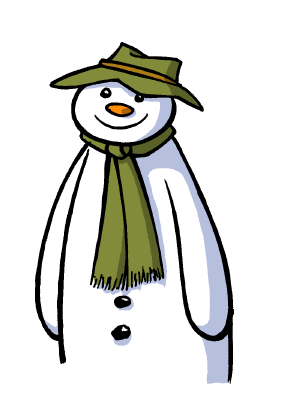 The Spirits are watching the party, that’s nice, and actually I don’t noe where the nerds are, they must be fading away back to real world as usually happens after christmas. In fact I can see some of you pinging away as well, bye m80s! bye!

And Burgess Meredith’s butterflies – who did NOT die – are here, fluttering with Burgess’ merry long olde beard in their little tiny hands, because here he is, the wise old Elfy himself, Burgess Meredith! This is a grand occasion indeed if he here. He goe up to Snatter and Snatter can’t believe it.

That’s a promising teaser isn’t it!

“Cast your mind back some years, to the time when you first disappeared from Elf School and appeared wearing that Snatting apparel. I assume you will not contradict me when I say that you found the Snatting Hat as a boy and placed it on your head?”

“The chamber in which it was sealed was an enchanted chamber. I myself had locked it using some of my most powerful spells. Only two men in all the world could have entered that chamber: myself, and… and I think you can guess the other.”

Snatter look wide-eyed. “The… surely not?”

Burgess nod. “The Chosen One. Yes. And that, of course, confirms something I had suspected about you since the day I saw you with that amazing beard of yours. That could only have been the beard… of the Snatter himself.”

“Time will tell. But I have observed your bravery on your adventure this year, and the way you defeated each and every adversary not with violence, though it was available to you in the form of the sword I instructed Rose to help you make, but with the gift of presenting presents and gifts. This is your, well it’s your legacy. One day it will be your highest duty, your greatest honour and your most heart-rending passion. You have grown not only physically but in your powers and your mind.”

“But I… I killed the Antisnatter, what kind of Snatter could kill?”

“You did not. Every one of Earth’s children must get a present. What present is best suited to them, well, that is decided by deeper magics than even I know. The Antisnatter is difficult to kill and I doubt that it has happened today, but either way, you did not kill him. You were only the messenger of the cosmos. You delivered the Antisnatter’s Christmas present; you delivered the world’s judgement upon him.”

“I just don’t… I don’t know.” say Snatter with doubts in head.

“But there is something else,” go Burgess. “Something still more delicious. The Antisnatter believed that by firing a quantum cannon into the Christmas Star, all of Christmas would be destroyed. But he did not spend long enough examining the properties of quantum chocolate. By firing concentrated quantum energy into the source of all Christmas, he did not destroy Christmas, he caused it to take on crazy quantum states for the duration of the blast.”

“Oh not you as well,” groan Snatter. Yeh this is a bit like how Antisnatter used to go on isn’t it. Burgess smile tho.

“The original Quantum Chocolate formed,” he sae, “by the merging together of all possible potential Christmasses, past, present and future. The same thing happened to the Spirits of Christmas Past, Present and Future during that blast. In that moment of quantum communion, they were one, and the Spirit was one with them. All three were mashed together into one single being, a great mighty oak of a being, a festive life form of such immense power that it could not be described physically, but might manifest in the perception of a mortal as… as a great tangling of vines and roots and presents and holly and pine. A Christmas Spirit so absolute and incorruptible that it was, decisively, finally, immortal.”

“The effect did not last long,” say Burgess the wise ancient elf, “but long enough for a part, just one small part of this celestial being to bud off and find its way down to the world.”

He put hand on Snatter shoulder. “There is a Spirit of Christmas out there, somewhere,” he say. “It is real, it is a person, just as its brothers Past, Present and Future can be said to be.”

“It was alive, and it was everlasting, and the Antisnatter created it. How wonderful. If only he could know.”

“I have something to add,” say a ladyvoice.